Visit of the Papal Nuncio 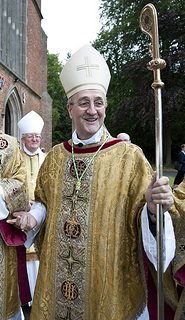 Today the Papal Nuncio to Great Britain, Archbishop Antonio Mennini paid an informal visit to North Staffordshire. After Midday Prayer in Holy Trinity, Newcastle, I was asked to say a little about our Deanery, its heritage, its social and economic circumstances and its spiritual life. Here follows the text of my talk.

Talk for the visit of the Papal Nuncio

Your Excellency, as Dean of North Staffordshire, I warmly welcome you to our Deanery and indeed to our county. It is an area rich in history and with a strong heritage in the Catholic faith, yet with the many challenges which are characteristic of the age in which we live. I speak for our Deanery, and also with his permission on behalf of the Dean of Stafford, Canon Michael Neylon, who is unable to be here today but who will be at St Chad's Cathedral later.

It is a special blessing to welcome you to this area on the feast day of St Chad, patron of our Diocese and missionary in the southern part of this county. You may know that St Chad was especially renowned for his practice of travelling throughout the area under his care, and we are delighted that you should be following his most estimable example.

Staffordshire has been been of the industrial powerhouse of England, providing many of the raw materials of industry and some of its greatest creative products. The Coal Mining industry was an important feature throughout the county, as in this area was also the steel industry and of course the pottery industry, which combined production with high artistic and creative standards. Internationally famous names such as Wedgwood, Doulton, Spode, Minton and many others, stood alongside many smaller concerns throughout the area. These industries provided abundant work, if often dangerous and not always well paid, and gave the region a stability and a continuity that led to the consolidation of close and steady communities.

Sadly much, almost all of this industrial economic background has gone.

Outside the urban communities agriculture has remained an important industry and small employer, but not  without its challenges. But the mines have all gone, and the pottery industry is just a vestige of its former self, despite its extraordinary heritage. The largest employer in the City of Stoke-on-Trent is the local authority, the second largest the Hospital. Outside the public sector, employment is sporadic and fragile. There has been a rapid growth in large retail outlets but smaller family run businesses have found it hard to compete. There has been large investment in terms of regeneration projects, many funded from EU funds, but some areas remain among those of the highest deprivation in the country. Further south in the county there has been expansion along of the M6 corridor of container centres, occupying former agricultural land. Aspirations, and educational achievement remain low.

There has been much immigration into the area - in earlier decades into the industries - but more recently into the lower paid work, often outside the formal and regulated economy.

Against this challenging background, Your Excellency, the Catholic Church lives and operates woven into the peoples lives.
There is an extraordinary history of Catholic faith in the county which I will try to summarise.

Prior to the reformation there is evidence of a  Church deeply rooted in the life of society and the faithful. There is evidence of Anglo-Saxon Christian community in Stoke. In the middle ages there was a Cistercian abbey at Hulton, which was apparently a place of pilgrimage, and also at Dieulacres near Leek and Croxton Abbey, and most notably of course the Church at Lichfield, the original home of the shrine of St Chad.

The Reformation brought a dark and difficult time for the faith in this country, and Catholic life was marked with hardship and indeed martyrdown. Amongst the martyrs associated with this area were Blessed William Howard, the first Viscount Stafford, and Blessed William Southerne, a Catholic priest who served communities in the county and who was hanged drawn and quartered not far from this very spot on 30 April, 1618.

It is reported that his execution was delayed as the court had difficulty finding a hangman williing to do the job. Such is the enduring affection of the people of Newcastle-under-Lyme for visiting clerics!

During the intervening centuries it was difficult for all but the landed Catholic gentry and their servants to maintain the faith, but the history of areas indicates a stubborn of the people for the old ways. There were some places, such as Painsley and later Cresswell where mass was celebrated and priests housed.  The established Church never quite embedded itself amonst the people as elsewhere, and when religious revival came to the are in the 18th/19th Century it was Methodism which first found a ready hearing amongst ordinary people.

As elsewhere in the country, it was first Catholic emancipation and then waves of immigration into the new industries, which led to great revival of Catholic life. In our area Churches were built at great expense by sometimes very poor communities. Wealthy and generous benefactors assisted this development. Religious orders returned to the area and supported priests and parishes. Notably the Dominicans set up houses in Stoke and in Stone - it was in Stone that Blessed Dominic Barberi based his mission.

Your Excellency, you have heard I know while at the Cathedral, about the current commemoration of the 200th anniversary o the birth of Pugin, the great architect of the Gothic Revival. We are rightly proud to note that in our deanery we have the Church that is by common assent considered his greatest work, "Pugin's gem", the Church of St Giles at Cheadle.

At the opening of that Church, Blessed John Henry Newman - then still a layman - sat amongst the congregation. He stayed for a time at Cotton, a church and school where many priests began the education which led to the priesthood. It was here that Frederick Faber founded the community which became the English branch of the Oratorians. St Charles of Mount Argus also lived and exercised his priesthood from there.

From this time the Church enjoyed an unprecedented growth and sense of self-confidence unknown since the reformation. Communities were consolidated and substantial investment made into Catholic education, which became and remains a model of excellence for the wider community.

After the second world war there was again rapid growth in the Catholic community. There was a new wave of immigration from Europe, especially Ireland, Italy, Poland and elsewhere, including the Ukraine, which enriched the Church in this land. Many new churches were built amongst the new housing estates, almost always preceded by schools for the children of the faithful.

In more recent times there has again been immigration which has enriched our communities. Again from Eastern Europe, and now also from the Philippines, and Kerala in India, and parts of Africa, most notably Nigeria.

We find ourselves now which many blessings, many opportunities and many challenges. Many of these are very familiar, some have a particular impact on us here in Staffordshire.

The rich heritage of the area, means we have many churches and many schools.  The schools are popular and successful. There is great demand for baptism and first holy communion, but it is difficult for us to connect families and young people with parish life, where the communities are smaller than they were, and more elderly.

We have a good number of priests in relation to the number of those who practice their faith by coming to mass, but now many more church buildings than we really need. Yet people have great affection for these buildings which have formed their communities and their lives of faith. The kind of rationalisation which has taken place in local industry and even housing is not what one we want to copy wholesale into the Church, urgent though action is.

As elsewhere, we find ourselves dealing with a highly secularised society where many of the values and patterns of life are highly at variance with the faith. Dysfunctional family life, the decline in marriage and alternative forms of living are situations we routinely encounter. Levels of petty crime and vandalism, drug abuse and relative poverty also have their impact, upon some more than others.

However, there are many bright lights amongst what is too easy to paint as a dark sky.

Our schools, far from being a problem, are another jewel in the crown, greatly valued and sought after, always reckoned amongst the most outstanding in our communities. We are fortunate to have a good and increasing number of deacons who support priests and people in their parishes. We have had a steady stream of vocations from our area, though we very much hope that will increase. As local vocations to the religious life have declined, we have been blessed by the African sisters who now form part of our Catholic Communities. Many parishes have supported their people in training as catechists, and we have run courses for catechists for parishes throughout the Deanery. We are especially fortunate here in North Staffordshire in that we have a lively and active Area Pastoral Council which organises events and activities of a spiritual and catechetical nature.

And as priests we have strong bonds of mutual support which we are keen to strengthen and develop. Perhaps because many of us are geographically close to one another and serve a number of relatively small communities, we often collaborate in activities and events.

So we are delighted to welcome you amongst us, and trust that your short visit may be happy and rewarding!